To become a “Renaissance Man”

Last October I was a guest at Hernen Castle. A reënactment weekend with groups who specialize in old crafts; bookbinding, tile making, leather- and woodworking, embroidery, cooking, lace making, card weaving and multiple others.

It was a wonderful weekend. After the public had left, the groups gathered in the great hall for a medieval banquet. With everybody in medieval costume it reminded somewhat of paintings of Pieter Bruegel or Jan Steen. People sharing food and a lot of laughs. Learning from each other, exchanging information about their research, techniques and history.

My table at Hernen Castle.
(Photo: The Paper Unicorn)

In the past I had attended similar events in the area where I live. These were centered around the Viking age. 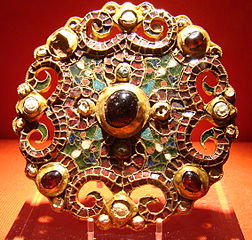 Wijk bij Duurstede (then named Dorestad) was the main trade center of Europe in the early middle ages. The well known missionary st. Bonefas started his last trip from there. From age nine to sixteen I almost lived in the museum and helped the local amateur archeology group. But later this stopped. My life took a different direction and the passion for history and archaeology faded to the background.

But I never lost interest. And this weekend in Hernen made me realize how much I had missed it. It really was like coming home. Although I felt a little out of place in my modern clothes.

A few weeks later I got another invitation to attend a reënactment event in 2016. Sandra and I started thinking about getting our own historical costumes and gathering a ‘kit’ of period-correct objects to go along with it.

A nice idea, but where to start? When it comes to clothing there are two options. The easy way is to buy a set from one of the many vendors who supply clothes for fantasy or reënactment. But there are a couple of downsides to this. One is that the scope is limited, the other is that it’s often quite expensive.

Because our financial resources are limited and we have specific wishes we decided to make our clothes ourselves. Leaves us with the question what to make.

Most of the groups at Hernen focussed at the late middle ages (ca. 1250-1500). The sources for clothes and crafts are various and numerous. A lot of medieval manuscripts, statues and paintings. Like the book illuminations of the Van Limburg brothers or the “Nürnberger Hausbücher“. But despite the fact that there are a great number of crafts depicted in these books, there is no “Lautenmacher” among them. Although in 1623 they depicted an “Orglmacher” (Organ maker) named Wolf (Wolfgang) Besler.

Wearing medieval clothes is great, but would limit my scope drastically (only medieval lutes). So we decided to take another starting point.

In his “Ständebuch” Jost Amman gives a depiction of the whole society of his age. In 114 woodcuts, indexed by the social status and importance of the subject. It starts with the Pope and Bishop and goes down to Scribes, Brewers, Carpenters and at the lowest end a variety of Musicians and Jesters. In the book the “Lautenmacher” is right between the Pin-maker and the Miner. Closer to the Musicians and Jesters than to the Pope…

Amman published his book in 1568, so this puts it around the middle of the 16th century. The Netherlands still lived virtually in the middle ages. The 80-year war with Spain had just started. The so-called ‘golden age’ still had to be born with the fall of Antwerp.

This depiction shows a lute maker in his workshop, playig on a 6-course lute. He wears clothing that is typical for the 16th century. A jerkin over a long shirt, short trousers over long socks, a cap on his head. Around him are typical tools of the trade; planes, chisels,  glue pot, a hammer and a hatchet.

His clothes aren’t very different from those worn in the late middle ages. For his time they look a little bit old fashioned, which would certainly be in line with his lower social status. The poor often wore old second-hand clothes.

Making a reconstruction of this engraving is a next step in getting more inside knowledge of the way the old masters made their lutes.

The Pauper and the Prince…

When you visit a reënactment event or renaissance fair it will probably have occurred to you that there are a lot of people dressed in extravagant clothes. Colorful and richly dressed. Nobleman, knights, soldiers, and often a group of beggars along with it. But the ‘common’ people are more scarse.

Sandra and I decided to try to keep it simple. Colored garments were expensive and mostly reserved for nobility. Often the colorful depictions in paintings are used to underline the questionable nature of the person wearing the clothes.

To make the clothes as accurately as possible we did a lot of research. Fortunately we have gathered a lot of information and materials over the years. Friends often call our house ‘the museum’. Beside a space to live it also serves as atelier and library.

Years ago my old boss threw away an old cow skin. It had served as a rug in his livingroom, but his wife hated it so it had to go. Because I hate to waste good materials, especially when they come from natural sources. I took it along, thinking that someday it would find some new use. Well, it did…

It was cut up to be used for our clothes. First I cut the pieces for a leather jerkin. But a lute maker with cow spots on his jacket looks strange, so the hairs had to be removed. Normally this is done before the skin is tanned, and afterwards it is a lot harder…

I used a soldering torch to scorch down the fur (left). After which I sanded the surface and coated it with beeswax.

One of the fun parts about this project is that it adheres to everything that interests us. Making our own clothes and looking for accessories, often with re-purposed materials and basic techniques. It involves fields we don’t know yet, but are dying to explore, like leather- and metalwork. To me it’s part of what I have always done, exploring, gathering knowledge and putting it into practice. To become a jack-of-all-trades or ‘renaissance man‘. Translating things from the past, to people from the present, to make something new for future.

3 Responses to To become a “Renaissance Man”