Sometimes when we work with art, we tend to focus on the details and forget the bigger picture. Like making a jigsaw puzzle, where you keep adding pieces, but forget to look what is depicted on it. 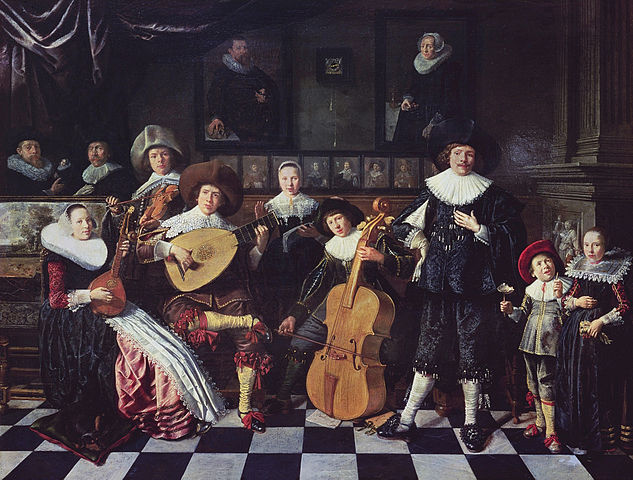 Almost every time I start to dive into something it builds up like a snowball. Things tumble around, more is added, bonds between various subjects are formed while others are reinforced and tightened. When I stumble upon something what I don’t know what to do with, it needs to simmer for a while. Sometimes it stays there for years, as a little lead that still needs more investigation. Or a little trivial piece of information, not needed for the actual investigation, but still interesting.

It’s easy to get lost in the details and these little trivialities. But when I do and take a step back from the work, take another look at it. Often the things I was looking for were there the whole time, in plain sight. Taking this birds-eye view also gives the opportunity to see what pieces of the puzzle are missing.
Or there are little accidents, when loose pieces suddenly fall into place, often caused by people I meet, walking encyclopaedia themselves, who act like living catalysts.

When you start researching the works of Johannes Vermeer, sooner of later the name “Dirck van Baburen” pops up. Maria Thins, Vermeer’s mother in law, owned Baburen’s most famous painting; the procuress. Vermeer used this painting in the background of at least two of is paintings. 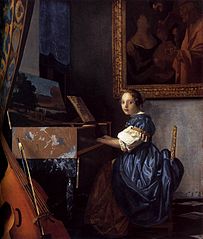 Baburen was a member of an art movement we now call the “Utrecht Caravaggisti”, a group of painters who in the first half of the 17th century worked in the style of the Italian master Caravaggio. Most of these painters travelled to Italy as a part of their education. Others -Rembrandt for example – never went to Italy, but still were influenced by this style.

Most paintings of this group are scattered over the world. Only a small portion remains in the Netherlands. Baburen’s procuress for example, now resides in the Museum of Fine Arts in Boston.

The second most famous procuress, by Gerard van Honthorst, is in the Central Museum in Utrecht. Along with the Rijksmuseum and Catharijneconvent one of the museums I like to see as an extension of my living room. A place to study and get inspired. Going to either one of them is like walking into a candy store or playground; all bells start to ring.

The symbolism behind this painting almost deserves its own blog, but we’ll come to that later… All I can say for now is that it’s more surprising than you will expect at first glance…

Another painting by Honthorst we often see is this portrait of a young woman playing guitar, made around 1624. It’s in the collection of the Paris Louvre.

With the clothes she’s wearing are almost a resonance of the girl in “The Procuress”; a blue-white colored dress, with a yellow gown and feathers on her hat. The guitar she plays looks quite plain and sober, little inlay and a flat rose in the soundhole. 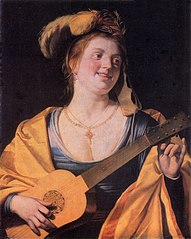 But there is another, lesser known painting by Honthorst, also depicting a girl with a guitar. It’s kept in the Lviv National Art Gallery in the Ukraine.

Although later (1631), and a different girl, the basics are the same: a woman in a blue-white dress with yellow gown and feathers on her hat. Only instead of playing, she is now tuning the guitar.

So what are we looking at? These three paintings by Honthorst most likely depict woman of the night. In the Calvinist Netherlands of the 17th century Netherlands virtuous woman were expected to wear sober clothes. The colorful clothes and feathers are a sign these woman were ‘loose’ and too frivolous. Also their rosy cheeks of the woman and the men are a sign of their sinful and lustful nature. These paintings all have a moralistic undertone. But at the same time people bought them and hanged them in their houses, so maybe they also liked to look at it?…

In a journal about his travels to Amsterdam (1640) the English writer Peter Mundy notes the following:

“As for the Art off Painting and affection off the people to Pictures, I thincke none other goe beeyond them, … All in generall striving to adorne their houses … with costly peeces, Butchers and bakers … yea many tymes Blacksmiths, Coblers, etts. [etc], will have some picture or other by their Forge and in their stalle.”

Another thing that’s used to underline this meaning of invirtue, is the instrument they hold. Tuning a lute or guitar was a symbol for cohabitation. “Snaar” (string) was a popular sobriquet for a prostitute (strings on instruments wear out, and they are thrown away after they break).

A nice illustration of this meaning is found in this engraving of “Student Music”. The man on the right is putting a new string on a lute. While the man on the left grabs at the skirt of the entering woman…

And it goes further: the lute was even used as a synonym for female parts. And restringing or tuning a lute for the sexual act. Like illustrated in this engraving by Frans Huys (ca. 1650-60)

The text under the picture reads:

But be sure to look at the cat stealing the milk, the little open box on the ground, the empty lute case, the pliers for the roaring fire and the depictions on the chimney…