Where other people sit down solving crosswords or cryptograms, I draw guitar plans. Taking measurements and literally re-searching these instruments gives many insights and can be a real puzzle.

My drawings are known for their high degree of accuracy and detail.
These plans are used by guitar and lute makers all over the world.

I offer a wide variety of instruments:

When you need a set of plans for a guitar or lute, you’ve come to the right address… 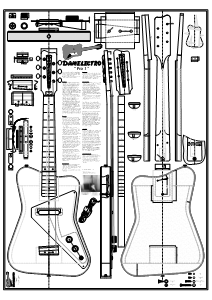 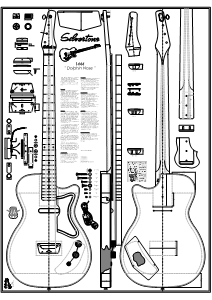 Silvertone model 1444  The so called “Dolphin-nose” bass. Based on the Danelectro U2. 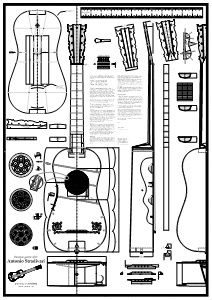 Instead of scaling down a larger guitar (like the Hill) or copying a heavily altered guitar (the Rawlings), this is an original Stradivari model.

More info on this guitar can be found in my #122 GAL article: “Antonio Stradivari: GUITARMAKER..!” (PDF).

A set of plans for the famous Voboam guitars. The instrument of choice for the court of Louis XIV

This extensive set of plans gets you:

All in all over 250 possible combinations! 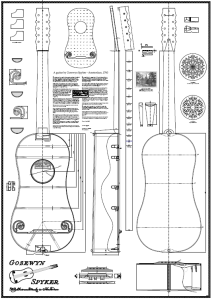 The only known baroque guitar by a Dutch maker!

Made in 1760 in Amsterdam. This guitar was rediscovered by musicologist and guitarist Jelma van Amersfoort. She asked me to make a set of plans and a reconstruction. It has some design elements of the Voboam family, but is also completely different in its construction.

This set of plans also includes the drawings of the original case, so no problem to go on tour with this guitar… 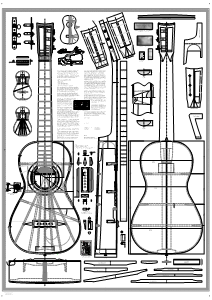 Romantic guitar after an early “Panormo Fecit” guitar from 1825.

The plan contains information to make both the “Spanish” (fan braced) and “French” (ladder braced” models.

Called “The Harp-Guitar” this unique 10-string guitar (ancestor of the modern 12-string) made by René Grunewald of New Orleans, right at the end of the 19th century. An ideal ladder braced folk/blues guitar as used by Daddy Stovepipe.

The body reminds of Martin and Washburn instruments of the same era.

This set of plans was inspired the 1581 Georg Gerle (Innsbruck). It’s my own basic student lute, ideal both for beginning players and makers alike.

The plan contains information to built both 6- and 7-course variants. As well as 3 different rosette designs.

The first sheet is a plan of the instrument, while the second sheet can be used as a template for the inner mould.

I’ve based this lute on the “Venetian Inch” as proposed by Robert Lundberg in his book “Historical Lute Construction”.

The lute has a string length of 59 cm.

The oldest instrument in my plan collection. This lyre was found in the grave of a Germanic nobleman, dating to 580 A.D.

Despite its age, it is a masterpiece of craftsmanship and engineering.

If you want to inquire about other models/instruments, just send me an e-mail.

All plans are full size, A0 format (unless otherwise stated) PDF’s.