At the roots of the guitar; The Carolingian CYTHARA. 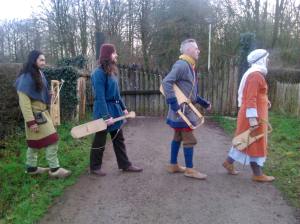 Perhaps you have already caught a glimpse of my research project of last year. It slipped in on some photos and social media postings. But I haven’t had the possibility to write too much about it earlier.

The reason?
Like most of my research projects – it completely exploded. And it lead to this “Year of the Psalter”

How the whole thing started

It all began during the research for the book about the Trossingen lyre. We consulted Annemies Tamboer, an expert on musical archaeology. During the meeting she noted: “You should have a look at the instruments from the Stuttgart Psalter. Those lyres are fun and have been studied at length, but nobody took a serious look at these.” 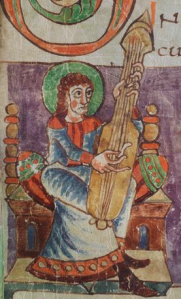 I knew the pictures she meant, you sometimes see them in popular guitar history books and on websites as “medieval guitar”. Just two or three manuscript illuminations of small cartoonish figures with big eyes and some long necked lute like instruments. There were also some small scribbles in the 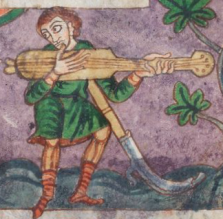 Utrecht Psalter…
But at that moment we were completely immersed in the Trossingen Lyre project, so embarking on a new journey would have to wait. The subject moved to the long ‘potential projects’-list in the back of my mind. A long list containing all kinds of interesting, creative (and generally extremely unprofitable) subjects to research and/or make. 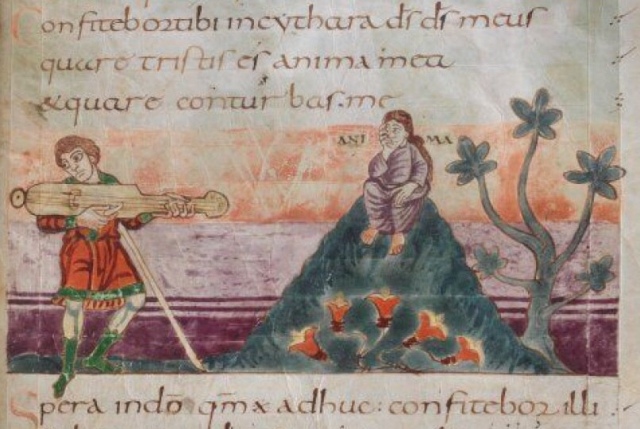 But there is a Dutch saying that ‘Blood will creep where it can’t flow’, meaning that you will find a way, even against all odds. Exactly that went on with this subject. All kinds of who?-what?-where?-questions popped into my head.

– Who made the psalter and where?
– What are these instruments?
– Are they only depicted in the Stuttgart Psalter?
– When did the depictions of these instruments start?
– How many are there in the original manuscript?
– Are there other instruments involved?
– Who plays them?
– How are they played?
– Do they look the same?
– Do we have archaeological remains of these instruments?
– How do they relate to other instruments from the time and place the psalter was -made?
– Is there remaining music from this era?
– Was it invented here or did it come in from some other place?
– What materials, strings, tunings, did they use?
– Is it really unchartered territory?

In short: this fool asked more questions than a thousand wise men can answer. To find answers it would be nice to know whether someone had done any research into these instruments. So I contacted Christopher Page, the chairman of the Cambridge Guitar Consortium, who also has a lot of knowledge about (early) medieval culture, instruments and music. He told me that to his knowledge there were no in-depth studies done after these instruments. But that theBritish Lute Society was doing a symposium on them in may this 2020. He gave me their contact information.

An event at Whitsun 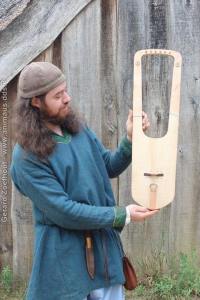 This all happened in may 2019 while I was working towards the Whitsun Viking Festival in Eindhoven. The book on the Trossingen lyre would be presented there, and I was also making the first modern reconstruction of the Prittlewell lyre. So mailing them about the project got postponed to after the festival.

But it wasn’t at a standstill. In one of my scarce free moments browsing around the internet, I stumbled upon a pdf-version of the Stuttgart Psalter. Leafing through the pages of these ancient works always fills me with delight, the beauty of the text and pictures. The way in which the artists interpreted the texts they illustrated, the small visual jokes hidden in the background, etc. It always starts an array of bells and whistles going off in my brain. Connecting dots and loose ends. 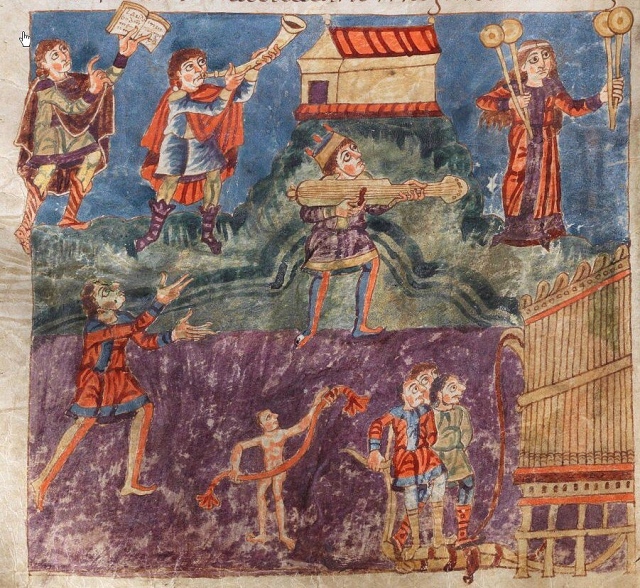 While browsing the psalter, I started to mark the pages with instruments. To my surprise there were no less than ten (!) pictures of these long necked instruments, along with a variety of other noise makers: horns, cymbal clappers (crotalum), the 10-stringed psalterium (lyre) and even two organs with their bellows. It also noted the name of the instrument: “CYTHARA” not to be confused with the earlier Greek/Roman Kythara, which is a very technically sophisticated lyre. 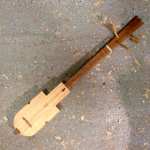 A small Coptic Lute after the Antinoë example

This was a lot more than I expected. And while lining them up it already became apparent that they could possibly be put in two categories; the large ‘Royal’ model, and the smaller ‘Peasant’ model. Using my now quite familiar process I started making sketches and plan drawings for a reconstruction. Comparing them to other instruments of their time which I already built before (lyres, a Coptic lute from Egypt/Byzantium).

A crazy idea came up: what if there were a couple of prototypes ready for the Whitsun Festival? One of the focusses was on the Trossingen lyre, with the book presentation, lectures and a multitude of Dutch players present. People around me expected that I would bring everything around lyres. But I always like to do something unexpected. So in my already full schedule ahead of the festival I also tried to squeeze in some prototypes of the Stuttgart cytharas. 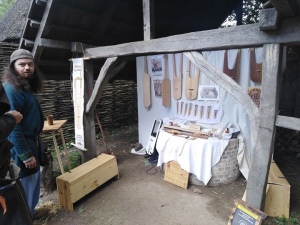 The unfinished prototypes hanging on the wall of my little shop in Eindhoven.

That was a bit too much to say the least. Making 6 lyres, 3 cytharas and a scale model of the Trossingen grave in a stretch of a week. Working round the clock to finish everything. Although they were present, I didn’t manage to complete the cytharas. Only one of them got strung up during the event itself. Add up 150+ hours of work, and three days of Viking festival in the mix and you can probably image that I overworked myself a bit. But it was totally worth it. 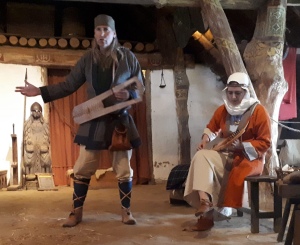 Spike and Ilja of Moro playing the Trossingen lyre during the  presentation of the book.

After recuperating a bit, I send an e-mail about the project to Christopher Goodwin, secretary of the Lute Society . He reacted asking me whether our mails had crossed each other. It became clear that Christopher Page also contacted him and told him about my interest in the cytharas. Strange enough his mail had erroneously landed in my ‘unwanted’ folder. When I looked it up, there was a surprise inside: an invitation to attend the symposium in May 2020 to give a lecture on the Stuttgart cytharas. At the moment it had been send I hadn’t even start on the prototypes…

Off course I reacted positive and decided to work further on the prototypes. And also to do some experiments with tunings and stringing. After the Trossingen project was finished, I needed an excuse to dive further into the world of the cythara. 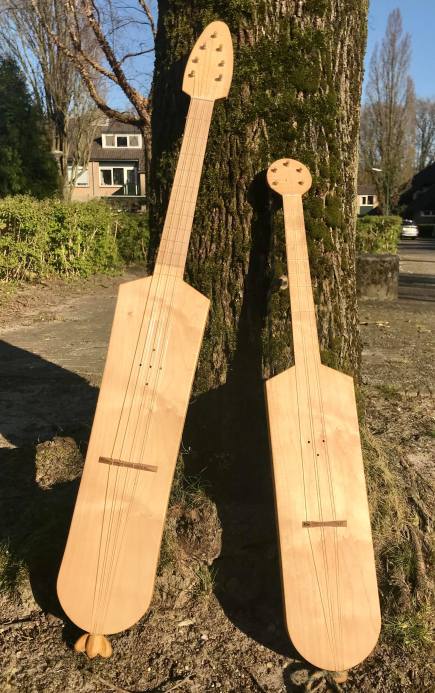 Two of the first prototypes: the “Royal” (left) and “Peasant” (right) model. 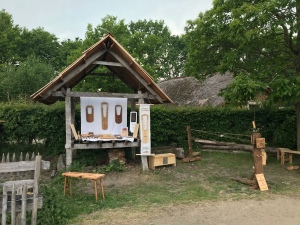 Early September we had the Early Medieval Market at Schothorst, the farm that is my Living History home. This is where I managed to finish the prototypes, and where they got their first test run. Living history events are fantastic when the visitors are there along the day, but in the evening the reenactors crawl together around the fire to share good medieval fun: mead, stories, more mead, jokes, food, beer and (…) music! 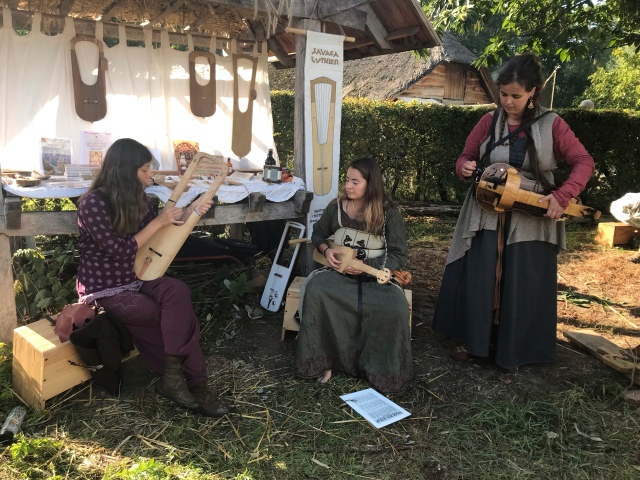 A cross-over in time…

I took along the cythara to the evening feast, and while I have sworn secrecy about the whole ordeal, let me suffice to say it was a great success. The instrument was adopted by a couple of musician friends and played al night in a jam session along with drums, lyres, flutes etc. Around 6.30 in the morning it was brought to a close. The same scene unfolded at other festivals and in December at the Jule fest. 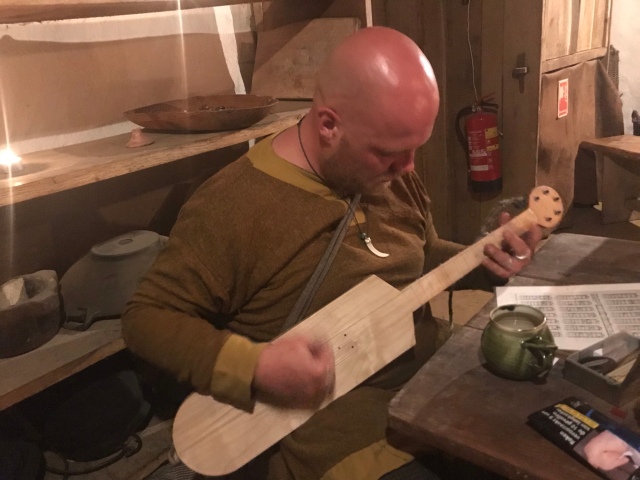 Bart trying out the first prototype

And there is even some footage of those first moments. Please be advised that this was shot on a simple telephone, in some of the worst of circumstances.

The Cytharas are tuned to an open D tuning (DAd) but can also be tuned EAd like the lowest strings of a guitar. Either way they are easily picked up by players even at their first try.

Lectures and more than expected

I started working on two lectures: one about the Lyre, the other about the Cythara. The first was planned in March, and given for our local historical society. The second was planned for May at Dutch Church in London… But then the pestilence of COVID-19 hit the world and all plans came to a stop. The symposium was postponed, but they asked me to write an essay on the Stuttgart Cythara

for Lute News, the magazine of the British Lute Society.

While researching for the essay, more sources popped up. I found some recent articles and a treatise that touched on the subject. Along with a recently published book by Hans de Zeeuw on the eastern TANBUR.

In other Carolingian manuscripts I found pictures of instruments that could be identified as Cytharas. The earlier mentioned Utrecht Psalter, but also less famous or even quite obscure works of a period we call the Carolingian Renaissance. 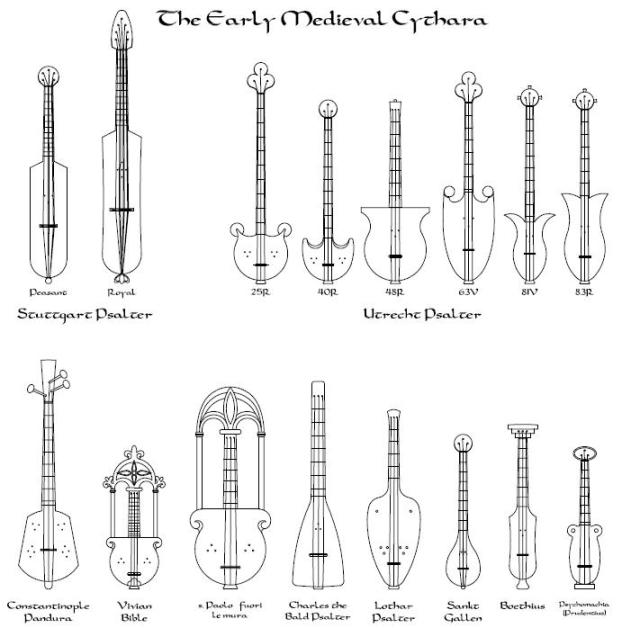 The whole lockdown gave me time to work on the data found. And make reconstruction drawings for all of them. A total of 15 different models some even in two varieties, plus a Byzantine Pandura, the ancestor of the Cythara.

Last weekend we had the first real Viking event in a very long time. Time to check two of the new Cytharas I made for the Schothorst farm. They already had one of my reconstructions of the Oberflacht lyre and now the range is expanded by an Utrecht and Stuttgart Cythara. 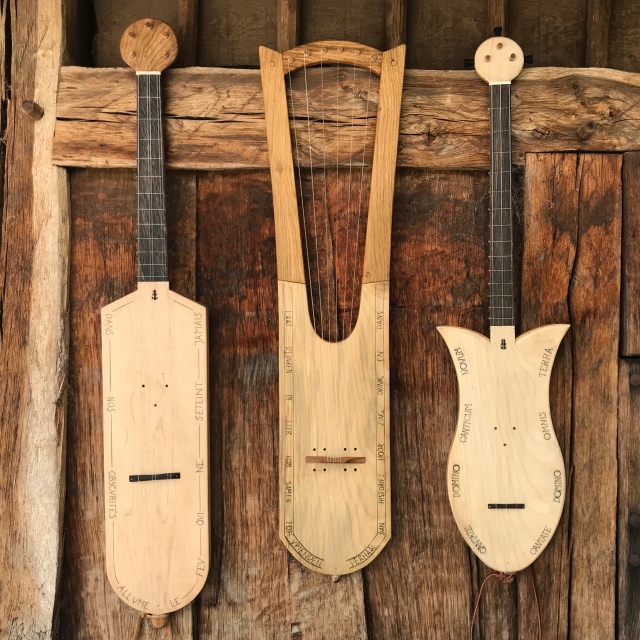 But even better: there were people to play them!!! 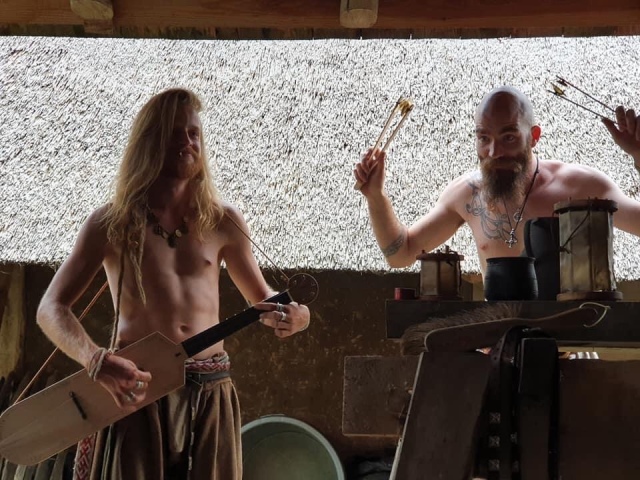 If you want to try them for yourself some patience will be required, the events at Schothorst will be without public for a while. But you can come over to my workshop and commission one for yourself. 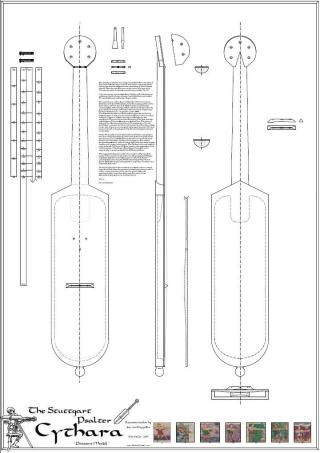 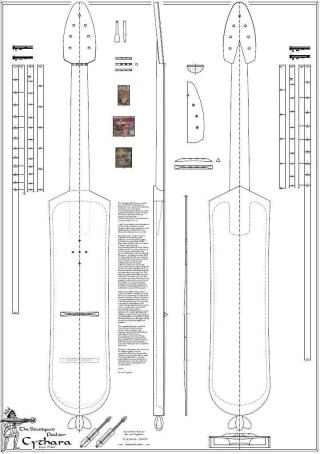 Or you can make one for yourself using the plans I published for them.  Besides the Stuttgart Psalter models I have also made plans for the other examples: the Utrecht, Lothar and Charles the Bald Psalter, as well as the Constantinople Pandura, Prudetius Psychomachia, Bamberg Boethius, Vivian and S. Paolo Fuori le Mura bibles. By publishing these plans I hope that other instrument makers and re-enactors will also start to experiment with these almost forgotten instruments.

These plans are all available in a couple through my Payhip store at www.luthierplans.com 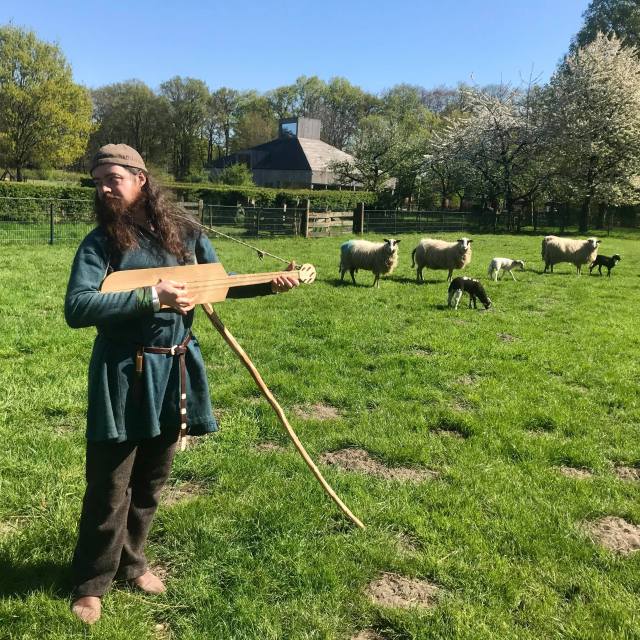 The essay on the Stuttgart Psalter will be published in the fall or winter edition of Lute News. Perhaps the symposium may be next year.

3 Responses to At the roots of the guitar; The Carolingian CYTHARA.