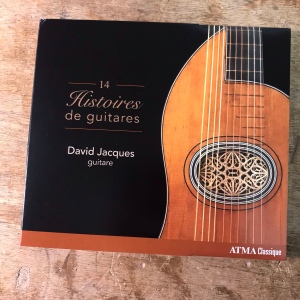 At the 8th of january an enveloppe fell on my doormat. So far nothing unusual, that happens regularly, but this time it contained a nice surprise: the new cd “14 Histoires de Guitares” by Canadian guitarist David Jacques.

Over the last couple of years David has built an impressive collection of original guitars by some of the most important makers in history.  Unlike most guitar collectors he doesn’t keep his treasures hidden, but shares them with the world. He even tours with them! And unlike most collectors, he is also a very fine player. The old adage that players don’t collect and collectors make lousy players clearly doesn’t apply here.

Some of the highlights of the collection;

Last year David made a concert program around these guitars. A journey through the whole history of the guitar. With music from all geographic directions. From all time guitar hits  written by Santhiago de Murcia, Mauro Giuliani and Francisco Tarrega. But also to my own delight also a piece by Angelina Panormo (yes, she was the daugher of Louis Panormo, and married to the guitarist Huerta) whose music seems to gain interest among guitarists in recent years. Other unique pieces from the Princess An Lute book to contemporary variations on traditional Cuban themes by Leo Brouwer.

It is hard to describe how unique this collection and project is. Some of the guitars I never dreamt of hearing. Like the Villaume & Giron theorbo guitar. I knew of one example in a museum collection, but that is never played, let alone taken on the road for concerts. You only see it in guitar books, as a curiosity from the cabinet of guitar rarities.

Others are amongst my personal favorites. Like the Torres SE109 from 1887, one of the smaller and less decorated guitars by the father of the classical guitar.  An archetype for any modern concert guitar. Torres proving his skills as a maker. Using modest materials (simple plain cypress for the back and sides, medium grained spruce for the top), to make a fantastic guitar.

The same goes for the 1665 Alexandre Voboam, which was in the collection of the Sinier de Ridder workshop (who did a great job restoring this old lady). Also one of the plainer models in the Voboam family oevre, but a prime example of their work. A picture of the barring is in Andreas Schlegel’s “The Lute in Europe 2”, which I gazed over hundreds of times, and still use as a reference (also for my upcoming set of Voboam building plans).

He cd is accompanied by a very nice booklet with photos of, and more information about the guitars used.

All in all this is a cd that should be in the collection of every guitar enthusiast. It’s fantastic to hear the nuances between the different instruments and pieces. Over the last weeks it has been a constant resident of the workshop’s cd player.

You can also follow David on Facebook. And I would recommend you to do so because besides his guitar recordings and he occasionally uploads hilarious oher videos. Like his christmas series… Be sure to check it out!