All beside the normal days at the shop. With so many things going on it was almost impossible to find time to write blogs.

But I am trying to better my life and get back to my normal pace of three blog posts a week. So here is another sign of life from the workshop.

Rise of the machines

My workshop is divided in two sections: a “clean” workshop with workbenches in the back, and a machine shop in the front. Both sections are roughly 4×5 m².

In the machine shop we find a variety of tools. Beside an old table and miter saw with their dust collector (all Elektra Beckum, about 30 years old), small drill press and lathe we find a couple of home-brew finger cutters; the IKEA-router table and a small rolling-pin thickness sander. The Elektra Beckum tools aren’t mine, but belong to the shop building.

In February the dust collector ceased its activities. After a couple of replaced capacitors over the years, the motor finally gave up and burned out. There is absolutely no blame, because it has worked as hard as two machines, for a double amount of time. So it needed replacement. But perhaps you know how things like these go, it always takes a while, too many other things on hand.

I had to use the saws without dust collection and simply swept the floor afterwards. This works for a while, until it gets busier and there is no time for cleaning. So the shop slowly started to look like a hamster cage.

Another tool I desperately needed was a bandsaw. Initially decided to make one myself, but there are only 24 hours in a day, even though I still try to squeeze a couple more in. These attempts fail miserably, but it’s a good thing to strive for.

So an affordable, medium-sized bandsaw would do the trick. Mainly to cut lute ribs, guitar sides and rough cutting stock. Some of my fellow Dutch guitar makers advised to get the HBM 350, made in China and imported under a variety of brand names. HBM stands for “Herman Buitelaar Machines” the distributor for the Netherlands. With 14″ wheels, it’s just up to size for small shops like mine.

The third tool I needed was a thickness sander. Or needed… it is possible to do without, but it certainly makes the life of a luthier a little bit easier. We had one at school, and it’s especially well suited to bring curly woods to the desired thickness. Last year I made a little one myself, from an IKEA bar stool, rolling-pin and the motor from an old centrifuge. It works, but that’s all I can say about it. You need to push the pieces through by hand. No problem if it’s one piece, but when doing the ribs for several lute bowls, your hands start to cramp. After some deliberation and advise from fellow guitar makers I also got one from HBM.

So a lot of stuff to clean and to get. The tool store is near Gouda (you probably know them from the cheese that originates there) about 60 km from here. A friend graciously helped by driving there with a van, because the packages are rather large and heavy. Along the way we visited Joës, to pick up an old anvil (yes, I will start blacksmithing soon), have look at his shop and drink some coffee. More on that later…

Since the last cleaning (around october) a lot of clutter collected in the shop. Especially woods and board materials, all covered with a fine layer of sawdust. So everything is taken outside and brushed off, or given some treatment with the vacuum cleaner. 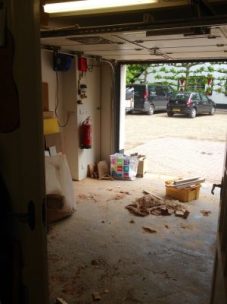 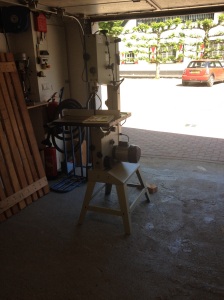 Soon it started to look like there was an empty space hidden under all the rubble. After everything was cleaned up and out the machines could be brought in. Starting with the new dust collector. This model is a bit larger and stronger than the last one.

This entry was posted in Projects, Uncategorized, Woodworking, Workshop and tagged Workshop. Bookmark the permalink.