Since long I wanted to do something with the plague. Yes, that sounded weird, I know. One of the most influential pandemics in the middle ages. The various outbreaks changed the course of history. Subsequently killing one fourth to half of the population.

Medical knowledge was limited at best, and largely based on the ideas of the ancient Greek and Roman writers. Balancing the four humors, astrology, miasma etc.

The cities hired special “plague doctors” to treat the victims of the black death. Often these people weren’t real doctors, but people who were paid to take the risk of dealing with the sick . Beside treating people they recorded the number of deaths due to the plague.

These doctors didn’t know real cures for the disease. But experimented a lot, from steaming in mercury to ointments made with faeces. In the 17th century one of these doctors came up with a method to protect himself against miasma, the foul air that was supposed to be a cause. A heavy waxed coat and a mask with a beak and glass eyes. The beak was filled with scented herbs and spices. 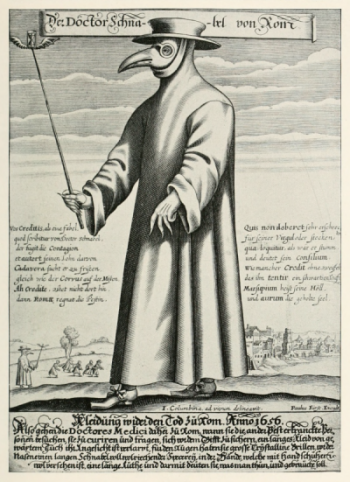 When you saw one of these ‘birds of death’ at your bed, you could be sure that your chances of survival were slim at best.

To incorporate this into our reenactment, the idea came up to make a costume and write a sketch around it. A couple of weeks ago (right before the Baburen event) the costume was ready to be tested.

An advantage of this ‘plague doctor’ character is that we can take it along quite easily. A costume and a couple of accessories (body chart, walking stick, skull and a plush rat) that fit in a small space. The robe can be worn over other clothes. So it can be put on and off fairly quick.

The sketch is short and entertaining, telling about the various forms of plague, causes and proposed solutions. It can be given a couple of times a day, beside our normal activities. 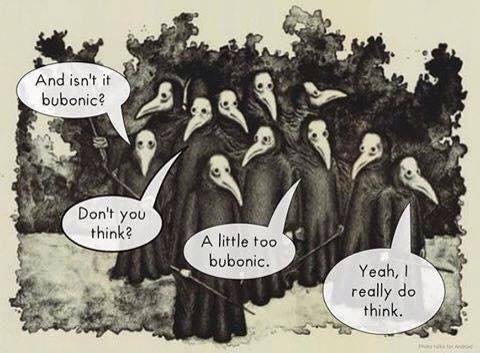 You will probably find “Dr. Schnabel” at various Dutch reenactment events. So be prepared to meet your end…

3 Responses to The plague doctor