It’s going quite well in the shop. Finishing some projects and starting new ones…

You probably know by now that deep down I’m a neo-luddite. I like to do things by hand or at least muscle power. But some electric tools simply can’t be beaten. Like the bandsaw; one of the most versatile saws for a luthier. Resawing small logs, making sides and lute ribs, etc. 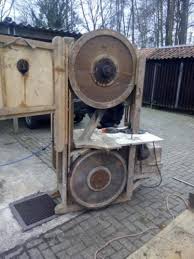 the past months I have watched the Dutch version of Craigslist closely, looking for a bandsaw within my budget and adhering to my demands. But no success. Either too small, large or expensive. There were some beautiful antiques, cast iron, rusted strong and heavy. But in need of a too much tlc or very expensive.

This was one I seriously considered, quite cheap and strong. Made of wood, probably by a craftsman himself. Like it told a story of its history. A large stationary motor and some giant wheels. Unfortunately it needed some serious work, a full restoration. A huge project, literally too large for the shop.  But idea that it is possible to make a bandsaw really appealed to me.

Like a lot of these ideas I initially put it on the back-burner. It seemed like a large undertaking, needing a lot of materials and work. Sometimes I googled on “Wooden bandsaw” and found some beautiful historical examples. 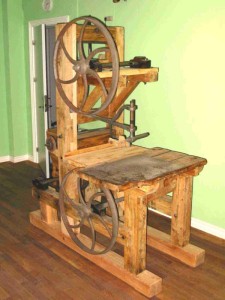 Especially the one on the left, made of a large wooden beam, with cart like wheels.

The idea got a boost when a friend sent me a movie of Matthias Wandel’s bandsaw projects. He made his own woodworking machines… out of wood!

This showed me it is possible to make a bandsaw with simple materials. But it still looked like a lot of work, needing a lot of materials. Well, it turned out I already had a lot of these… When my friends throw out a piece of furniture they often ask me whether I can use it to make something else. Especially with pieces made from solid wood. I feel there is no sense in cutting down trees for new wood, when we throw away perfectly useable materials on the other end. Repurposing and re-/upcycling is something that should be encouraged. Make something new, rather than buying it new…

A while ago I got some boards which had belonged to an IKEA book rack. Made from solid pine. Enough to make the frame. 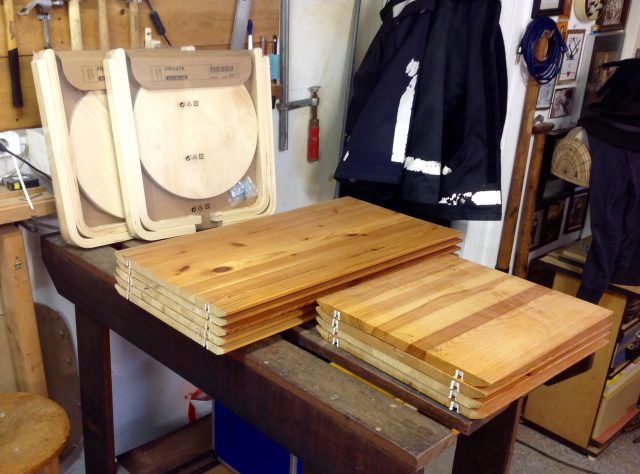 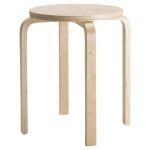 ut what about the wheels? As you know, I like IKEA-hacks. SO the first thing that came to mind were these Frosta stools from ikea. Made from birch multiplex, already in the form and with a center-point.

With a 14″ diameter, ideal for a mid-size bandsaw. Another nice feature: they’re dirt cheap…

And so it begins. Removing the acrylic varnish of the boards with a coarse belt sander before cutting the planks up and gluing the frame. 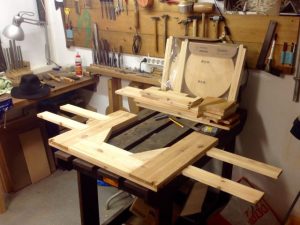 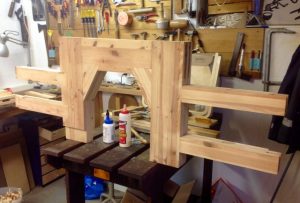 And thus you build up the frame, one layer at the time. Nothing fancy, this isn’t fine woodworking. But despite that it’s surprisingly sturdy and strong. Like those large glued up beams wooden used in the roofs of modern buildings.

The advantage of this construction is that the saw will be heavy, but also easily movable for one person.

And let’s be honest. What’s cooler than making instruments on machines you have built yourself?

Definitely to be continued…