Forgery at the shop…

One of the things I’ve wished for a long time is to have a small forge. Ever since being a boy blacksmithing has fascinated me. From old village smiths making farming tools to the Japanese epitome of the samurai sword.

For woodworkers metals are often an alien material. It’s homogeneous structure, hardness and plasticity. The fact that it can be recycled over and over again (your bicycle will probably contain a few iron molecules that once were part of the knife used to murder Caesar). It calls for a different approach and use of materials and tools.

It’s my ultimate goal to make EVERYTHING involved in the guitar making process myself. So not only the instruments, but also the hardware and even the tools with wich they are made. 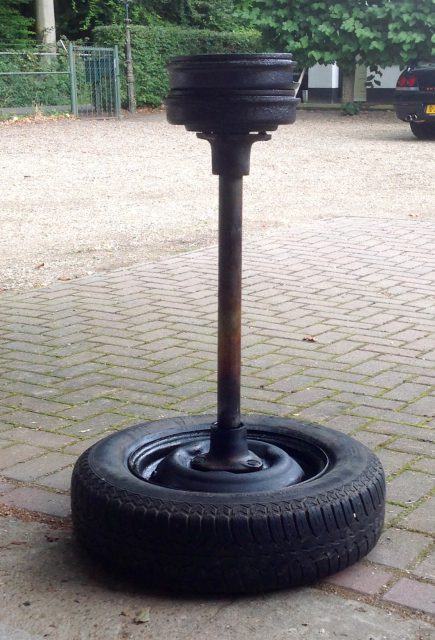 I’m gradually working towards this goal, but having the means to shape metals is a huge step forward. Knives, chisels, etc. The largest thing I will make are probably a couple of holdfasts.

It has become kind of a sport to repurpose as much discarded materials as possible. In an attempt to reduce waste and use our resources carefully and consciously.

So when an old tender was discarded, I jumped at the chance to make a break-drum forge.

Like many of these projects it needs to simmer for a while. Getting an idea, designing, collecting materials, trying something, getting back to the drawing board, giving up for a while and then later completing it… It’s all part of the game. 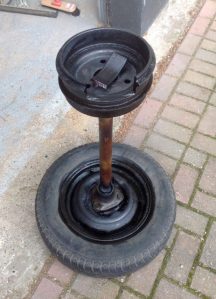 It pretty soon became apparent that one of the wheels would become the base. It’s wide and heavy enough to provide a stable basis. The tire even provides some extra grip.

The top is formed by the break drum, while the ends of the axle form the basis for the middle section.

While cutting the side port in one of the drums it occurred to me that it would be more practical to use both of them. The uncut version had to be bolted to the base, with the cut model on top. In the lower one a hole to attach a blower, and the top half to hold the actual fire. One advantage is that the top is detachable and it becomes easier to get rid of ashes. 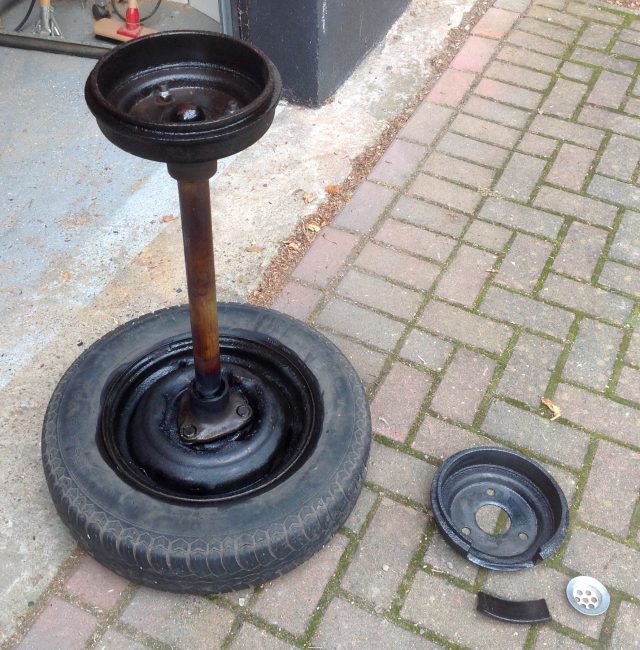 When put upside down the forge becomes a foundry. The hole in the side can be closed, and through the large hole in the middle a small crucible can be put into the fire. This way the halves become a closed pod, holding most of the heat inside. The porcelain beaker is for demonstration purposes only, not to melt anything. 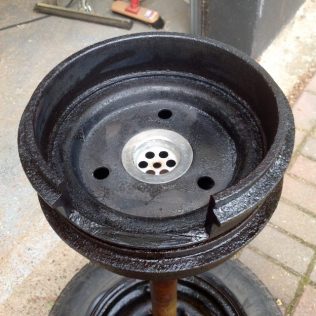 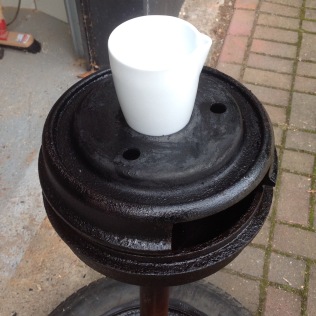 This video originally lead to the idea of making a foundry in the first place. I still like to make one like this, simply because it can be used to melt a larger amount of soda cans.

The only thing I would change in the design is the entrance point of the blower. Instead of putting it in directed at the middle I would offset it in order to create a vortex. Making the distribution of oxygen more efficient.

So maybe I will be casting my own Bigsby’s in a while… (Just kidding, but this video is so cool)

Don’t be alarmed, the forge will only be used outside, behind the shop. I don’t want soot and rust affecting instruments.