As a woodworker I often get requests to repair or restore other things than guitars. Usually it’s furniture, and it depends on the piece (size, sometimes history, but also what needs to be repaired/restored) whether I take on the job. Over the years I’ve reglued countless chair and table legs, broken backs and arm rests (sounds like an E.R. in here). Often old pieces, as most modern furniture is made to be discarded when it breaks.

But sometimes other things get by the shop. And the best thing about restoring it is that you get a story with everything you take on.

A few months ago I got and e-mail with the question if I could restore an old wooden bus, made in Indonesia as a toy. The owner had gotten it as a child, when his sister was adopted. When their parents returned from Indonesia to pick her up, they brought the bus along as a gift. Made by local a local craftsman, by hand with whatever he had at hand: triplex, rattan, plastic, metal rods, tin cans and little wire nails. The whole finished with with paint and black marker.

The bus became his favorite toy and was played with extensively. Now, 25 years later it was in need of repair. It’s frond end had come loose, the plastic window teared, the front and rear axle were bent and broken off at the right. The writing on the side faded and dust gathered on the little yellow seats.

Although unusual, I loved to restore the bus. We agreed to keep it as original as possible. For the bus this meant the structure in some strategic places (the edges at the front and between the axles) with some small blocks.  The broken plastic windscreen was replaced as was a missing piece of a tin to keep te rear axle in place. The faded name “Asta Tekun” (dilligent hands) got retouched. For the rest only a light cleaning of the surfaces inside and out. 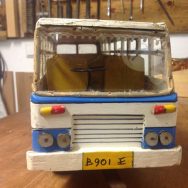 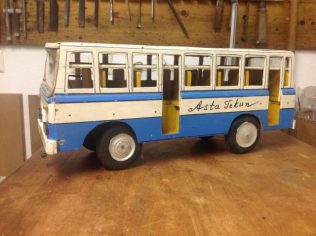 Ready for the next 25 years…

I love to repair and restore things that mean something to their owner. Like this toy bus an old guitar or a family heirloom. Often it also involves a story or memory attached to the artefact itself. Often this supersedes the monetary value of the piece. But much more than that it enriches the object itself. That’s why humans gather relics; to keep memories alive. Whether its from a saint, pop star, someone we love or the place we were born. These memories and stories define who we are and give us an idea of our roots. Markers to bring something or someone closer. A reminder of what happened before.

I am an adept of “conservative restoration” to keep the original patina and not to bring it back to a brandnew-like state. It’s ok to see that an object is old and has lived a life before. Sometimes all-over restorations remove a lot of an objects’ history. And by that a lot of the character is lost. The main focus of a restoration is to act in favor of the object at hand. Not to cause any damage or do any harm. Sometimes broken parts need to be replaced, but I always keep the originals with the instrument. Also everything needs to be reversible. The integrity of the object is what’s most important.