It’s probably one of the most (in)famous pieces of furniture we know. The so called ‘Red-Blue-Chair’, by Gerrit Rietveld. A design classic, a sort of 3D Mondrian in itself.

Famous for its modern looks and as a break with design tradition. Infamous because somehow the idea set foot that it is very uncomfortable. This is an example of an assumption made by the looks of a piece of furniture. It looks unfamiliar, so it must be uncomfortable, shouldn’t it? Ehmm… Everybody who tried one can assure you that it is quite ergonomic.

Judging from the fresh, modernistic looks, it’s hard to imagine that the first model of this chair was made almost hundred years ago. 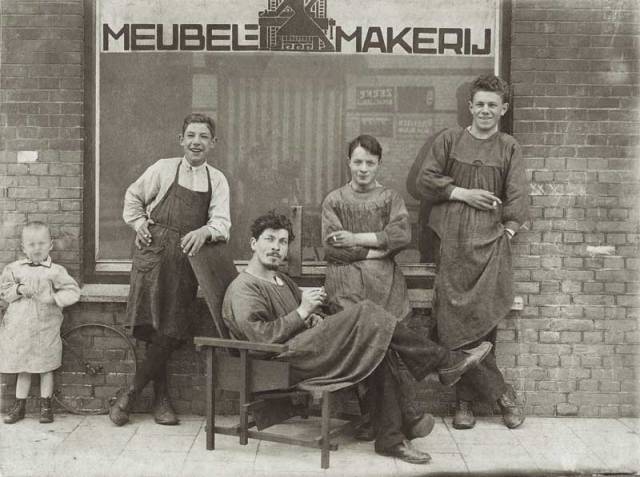 Gerrit Rietveld sitting in the first prototype of his armchair. This picture was taken in front of his workshop at the Adriaan van Ostadelaan in Utrecht (ca.1918). The boy behind the chair is Gerard van de Groenekan, his apprentice, who would later make most of the furniture designed by Rietveld. 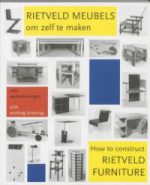 I have always been intrigued by Rietveld’s designs and this chair in particular. At sixteen I made a 1:4 scale model of one for the library were my mother works. At the time I had to rely on pictures and some basic measurements to re-engineer the design. Later a wonderful book with plans was published along with a book and dvd about the chair’s history.

One of the things that always stood out for me in all studies and lectures about Rietveld and his chair is that it is treated as a design object. A modern artifact, a piece of art, revered for its shape and reputation, rather than its function as a chair. It’s often forgotten that the thing was made of wood and designed by a human being.

A few years ago we had a festival with a group of friends. There was a tack of willow branches on the field. I suddenly got the idea to take a few of them to make a willow-branch version of the Rietveld armchair. A little project under the name “It’s A WOODEN Chair”… Just to show people it is in fact a WOODEN chair, not just an object compiled of black, blue and red lines and plains. Just simple willow branches, some rope and a pine back and seat.

Tomorrow the renewed Centraal Museum in Rietveld’s hometown Utrecht will be re-opened after a renovation. Last week Sandra and I won two tickets for the official opening. The CMU is home to one of the largest collections of Rietveld furniture and materials in the world. The famous Rietveld Schröder House is part of the museum (in 2000 it was added to the UNESCO list of World Heritage Sites).

It’s one of the best museums in the Netherlands. I go there a couple of times a year to get inspiration. They are also home to some great pictures by the ‘Utrecht Caravaggi‘. If you’re ever in Utrecht, please take some time to pay it a visit.