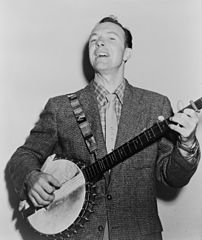 You will probably know him from songs like; “Turn, Turn, Turn“, “Guantanamera“, “Where have all the flowers gone?“, “Last night I had the strangest dream” and “We shall overcome“.

Years ago I was leafing through my parents’ old records. I had an old recordplayer and was looking for some things to play on it. That’s where my love for music was born. Finding some old LP’s by Bob Dylan, Donovan, Boudewijn de Groot (a Dutch singer), the Beatles, and many more.

My father told me to look for his Pete Seeger records, because that would be something I would like. When I played it was a bit of a deception. An old man with a broken voice, slow songs and a seemingly untuned banjo. I couldn’t imagine why my father was so fond of it.

Later I got another record of my aunt. “The Best of Pete Seeger”. It was worn out. But when I listened to the record over and over again the music grew on me. Now, years later the record is worn out even more, up to a point that it’s almost unplayable, but it’s still one of my favorites. There was something in the songs that fascinates me, where I couldn’t lay my hands on, but it felt right.

Later I learned about the history of his life and work. His strive for justice, peace and the troubles he faced. Despite all the oppression he worked on and stood his ground, keeping true to his ideals and principles.

But the great power of Seeger’s work dawned on me when I started to play his songs myself. The music invites listeners to sing themselves, to get an instrument and play along.

His songs were picked up and covered by other bands and musicians. Like The Byrds, Bob Dylan, Jackson Browne, Johnny Cash, Peter Paul and Mary, Bruce Springsteen and many more. But he also covered songs himself, like “This land is your land” from Woody Guthrie “Both sides now” from Joni Mitchell, or “Little Boxes” from Malvina Reynolds. The latter being a protest against the easy-going indolent life in the suburbs.

In the fifties the McCarthy administration considered him a communist and anational thread. They put him on a blacklist of subversive people. He was forbidden to play large concerts. But he was allowed to play in schools. The children grew up with his folk tunes, and gave rise to the folk movement of the early sixties.

But times and political tides changed. And in 2009 the former subversive artist was asked to perform Woodie Gutherie’s “This Land is Your Land” – together with Bruce Springsteen at the inaugural concert of president Obama…

One thing that inspires me is that he tried to encourage others. To make music, but also to think for themselves. He never stopped playing, even when he was in his nineties. Playing with other musicians, old, young and anything in between. Even when in his nineties he lost his voice and his hands became too stiff to play, he still took the stage to let people sing.

It is said that without Pete Seeger and Earl Scruggs the banjo would have died years ago. I don’t know wherether that statement is true, but it is true that both were very important for the popularity of the instrument. In the late forties Seeger published one of the first banjo instruction books. Its still available today, and has helped thousands to pick up the instrument.

He even developed a new type of banjo. To sound better with his low voice he asked a luthier to cut the neck of his banjo and extend it with three frets. Getting an instrument suitable for “E” tuning instead of the normal “G”. Making it more versatile.

It certainly was the main inspiration for me to make my own banjo.

In the spirit of his friend Woodie Guthrie, Seeger used his instrument as a canvas to carry a message. But where Gutherie’s guitar read “THIS MACHINE KILLS FASCISTS” the head of Seeger’s banjo was inscribed with “THIS MACHINE SURROUNDS HATE AND FORCES IT TO SURRENDER”.

This inspired the banjo player of the folk-rock band Flogging Molly to put the text “THIS MACHINE HONORS PETE SEEGER” on his banjo head.

The message of brotherhood

To me Pete Seeger is an inspiration, an example of human resilience. Someone who carried on despite suppression, and spoke himself out for humanity, peace and brotherhood. A countercultural pioneer who brought people off all ages and walks of life together to sing. And in the process getting to know each other and become friends. That’s the basis of peace. I know some people will nod their head and view this as hopelessly idealistic. And you know, it is. But at least he tried, sowing seeds of love, friendship and solidarity. And that’s more than can be said of the people who condemned him.

It’s a philosophy I try to apply on all things I do. Wherether it’s setting up an exhibition about the war, writing, giving lectures, organising events or making and restoring tools or instruments.

With some friends we form an iniative group called  “A Tiny Start”. A couple of times a year we set up a market with secondhand books. All profits go to charity. The price of the books is very low, because making money isn’t the focus. Our real gain is something else. We try to bring people together and give new use to old books. By literally “working together” people get to know each other. Sharing time, food, laughs. As a logo we chose a handshake. Simple, but all the more powerfull, the beginning of great things. 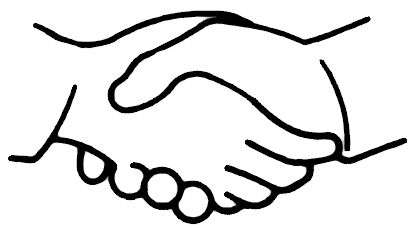