Lutes and Guitars for the Pharaoh

As a young child – about 8 years old – my interest in history was awakened by learning about ancient Egypt. I went to the local library to learn more. Starting with the children’s books, but soon also discovering the grown up versions. Learning all there was to know about pharaohs and pyramids, mummies and mythology. Like an incurable hunger for knowledge, I just consumed information. 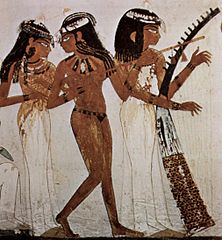 Learning about everyday life and looking at the beautiful reliëfs and wall paintings in the tombs, I soon found pictures of musicians. Men and woman playing on the harp, lyre, flutes and an instrument that was described either as a long necked lute, or as an early guitar.

But none of the descriptions was very detailed. Let alone giving any example of what kind of music was played on them or how it may have sounded. Especially the last thing fascinated me. This was in the pre-internet era so it wasn’t possible to google it or looking something up on youtube.

Sometimes you find an occasional instrument in a museum. But mostly harps and lyres and a large amount of rattlers (sistrum). But none of these were in a playable state.

The curse of Tut’s trumpets

In 1922 a pair of trumpets was found in the grave of Tutankhamun. One of sterling silver, the other of bronze. These instruments were in such a good state that it was even possible to play them! In 1939 this recording was made.

One of the trumpets found in Tutankhamun’s tomb. The wooden plug below is put in the trumpet when it’s stored to help it remain its shape. Like a case but from the inside. It was certainly up to the task, after 3300 years the instrument is still playable… “It’s that lousy good old craftsmanship, why didn’t they make things like they do today?” (Hawkeye Pierce) – Click to enlarge –

Well doesn’t that bring you back to a Boris Karloff movie?

I think we’re all more or less familiar with the populair stories about “the curse of the pharao”.

In recent years claims have been made that these trumpets have ‘magical’ powers. Their ‘haunting’ sound would summon war… They were played shortly befor WWII, but also before the 6-day war in 1967, the 1990 gulf war and the recent uprising in 2011 (during which one of the trumpets was stolen, but returned a few weeks later).

As with many of these myths it is easy to debunk them, but it’s more fun to let the ghost story for what it is. But it certainly adheres to my earlier notion that making trumpets is like witchcraft…

That long necked guitar or lute…

But there is an example of the long necked instrument that survived. Found in the grave of Har-Mose, a player who worked for an architect during the reign of Hatshepsut (the famous female pharao – ca. 1479-1458 BC). Although the instrument has been dated as being somewhat older (ca. 1490 BC) which would put it into the time her husband Tutmose II was king.

It is thought that the instrument was introduced to Egypt around this time and finds its origins in Mesopotamia.

It has a long neck which runs trough the whole length of the instrument. So it is easy to conclude the earliest guitar-like instrument we know already had a neck-trough construction, who would have thought that? The body is made from fine grained cedar and covered with a rawhide skin with holes. The instrument carried three strings of twisted gut, and there is even a pick preserved with it, attached with a piece of rope.

If you want to know more about this instrument the Metropolitan Museum if Arts has a great article here (PDF).

But it gets even better… These instruments didn’t die out when the Ancient Egyptian civilisation faded away. Their offspring can be found all over West Africa. Called the Xalam it is thought to be the ancestor of the modern American banjo.

and some construction details:

And play the blues…

With a little fantasy we also can see it’s form in modern archaïc home-made instruments, like the Didley Bow and Cigar Box Guitar…

All you need is a piece of wood (broomstick, table or chair leg, Tiny Tim’s truss), something to serve as a string (clothes line, old guitar string, rope) and a resonator (tin can, cigar box). Piece it together, add some decoration and play!