One of my favorite artworks is the drawing of “The Vitruvian Man” by Leonardo DaVinci. 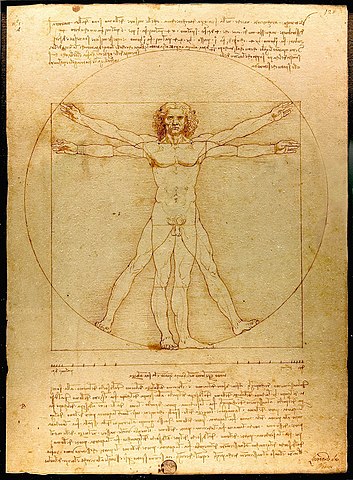 Apart from being a great artpiece it’s also a handy tool while designing. As the proportions are very beautiful.

In our time this drawing in one of DaVinci’s sketchbooks (now kept in the National Library of France), has become a symbol in itself. An archetype of the renaissance, science, arts and philosophy.

Partly because of the Dan Brown novel “The DaVinci Code”, the interest in DaVinci and his work has increased over the last years. Some despise this book, for spiritual or historical reasons. I quite like it, but don’t think we shoud make it more than it is: a NOVEL, a work of fiction, based on an interpretation of some facts and a load of legends. (I have an audio version of the book in the workshop, I listen to while working because it’s so nice to be reminded of those beautiful artworks.) But apart from this shroud of secrets and mythology Brown created, we still have the great legeacy of works by DaVinci.

To me DaVinci is one of the prototypes of the “Homo Universalis” or “Renaissance Man”. A human being who has knowledge of all arts and combines them into one person. In our current epoche it’s hard to become one,  as our society encourages us to become specialists, rather than generalists. That’s one of the paradoxes – or tragedies – of our time; we admire historical multipods, but discourage their contemporary equivalents.

As I said before; instrument makers are probably as close as it gets to modernday “Homo Universale”

The outline of a viola da gamba projected over the drawing of the Vitruvian Man. As published by Kevin Coates in his book “Geometry, Proportion and the Art of Lutherie”(Oxford, 1985)