Over the years many people told me: “You know so much about guitars, you should write a book about guitar making.”

It always appealed to me, but also seemed an impossible task. Until a few years ago I sat down with a guitar making friend, measuring a couple of vintage Danelectro’s. He told me people often asked him how to get started making guitars.

There are a lot of good books available on the subject. When I started building myself, most of these books were far too expensive for a young aspiring luthier. And when I had the money to buy one, it was always more urgent to purchase wood or tools.

Over the years I did acquire a lot of these books and found the rest in the library. One thing that occurred to me was that they all teached one way of working, often involving expensive (power)tools and woods.

While talking about the guitars we were measuring, the idea of a book about making a Danelectro-style guitar would be ideal. The sophisticated simplicity, making great sounding guitars out of cheap materials that are available everywhere.

More than any other instrument, the electric guitar has become a symbol of pop music and youth culture. In the fifties and sixties the instrument gained in popularity, as musicians like The Beatles, Rolling Stones, Buddy Holly, Bob Dylan and Elvis hit the stages. Unfortunately the shiny instruments of their heroes were far to expensive for their teenage fans, so they settled for the next best thing: A post-order guitar from the Sears or Montgomery Wards catalog.

One man who took on the challenge of making cheap, but high quality instruments was American inventor Nathan I. Daniel. He started a factory where they built simple guitars and basses, out of inexpensive materials. Pieces of hardboard over a poplar frame, elements encased in chrome lipstick covers. Despite their simplicity and modest price these instruments had a surprisingly good quality and very rich, characteristic sound. The low price brought the electric guitar within everybody’s reach. Many now famous musicians started out on these instruments and – even when they could afford to buy better instruments – continued to use and cherish them. Musicians like Rinus Gerritsen (Golden Earring) John Entwistle (The Who), Jimmy Page (Led Zeppelin) and Seasick Steve played them throughout their careers and you can hear them on hundreds of records. 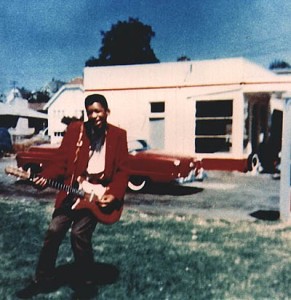 In the end of the sixties the little factory couldn’t compete with the Asian concurention and closed its doors. But this is not the end of the story. With the ‘vintage boom’ of the last twenty years the “Danelectro”-made guitars regained attention. People were tired of the smooth, over-produced hi-fi sound of the eighties and went looking for instruments with a sound of their own. Unfortunately a relative small amount of original guitars survived. Cheap instruments are an easy prey for dumpsters and barnfires. Or they ended up being smashed as ‘stage gimmick’ during concerts. An American company has bought the brand name and commissions multiplex copies from asia, but their sound is different from the originals.

Elvis on a Danelectro 6-string bass

Going against the grain.

The concept and philosophy of the old Danelectro guitars always appealed to me. Most guitar makers I know are always on the lookout for ‘the best wood’ and the most expensive and endangered species are in high demand.
But they don’t always make the best instruments with this. I see a lot of builders who use the most precious wood to make lousy guitars.

I worked at a guitar company that wanted to conquer the guitar world with a ‘revolutionary concept’. The price of the instruments and pretentions of the company were high, but these proved to be an empty shell. All they cared about was maximalisation of profit, instead of making a good product. Quantity went above quality, and feedback of customers and workers was ignored. This clashed with my concience and finally accumulated in a massive burn-out.

One of the best guitar makers in Holland:
Mr. Eugen Wulff of GUN GUITARS – Haarlem

A few months later I was invited by Eugen Wulff, the guitarmaker I mentioned before. He had acquired a couple of original Danelectro’s and he granted me permission to draw a set of plans. Like two failed archaeologists we carefully took the guitars apart, to measure, sketch and photograph them. Meanwhile regarding ourselves fools that we were painstakingly examining these once so cheap instruments, like they were made by Stradivari himself. Wondering what Nat Daniel would have said if he saw us working like that.

A short while after I also got to borrow a couple of original Danelectro made basses from Sef Coppers, a collector in the south of Holland. Meeting both of them was a strange experience, like I looked in a mirror. People just as crazy; One a guitar maker with the same almost obsessive powers and knowledge to make everything on himself, topped of with a great sense of design, the other a bass collector, miller, screen-printer , amateur-historian and rabbit-whisperer. Both Sef and Eugen are true renaissance men, as a sort walking encyclopedias they have the beautiful ability to talk about four or five entirely different subjects at once. People like this are very rare, and the only others I know that have these abilities are my wife, some of my closest friends and a scholar/harpsichordmaker from the USA.

The charm of Masonite Guitars…

The most charming thing to me is that Danelectro guitars go against the grain of everything you learn in lutherie schools or books. They are made from simple hardboard, glued to a wooden frame. But give an old Dano to a guitarist and they start to play with a wide smile on their face. And isn’t that why we make guitars in the first place?

After making the drawings I got a lot of questions from other builders how the instruments were constructed. The idea for a book soon followed, and I started writing.

In January of 2015 “Making Masonite Guitars” was published. Completely in line with the companies slogan “The highest quality and most modest price go together when it’s a Danelectro” it has become a low-priced, compact but very complete book.

In 26 pages (everything written and drawn by hand) you will find all information needed to make your own Danelectro-style guitar. (While writing I found out that it’s easier to write 250 pages about the subject, there is so much to tell…)

The aim is to bring guitarmaking within anybody’s reach. Cheap enough to fit anyone’s wallet. Small enough to keep at your workbench as a sort of pocket bible for guitar makers.  To help beginners to start, but also to let established builders re-think their methods. To show that you don’t necessarily need a lot of money or expensive materials for a good instrument. On the contrary: it’s much more satisfying to make our own instrument, simply with your own hands, with materials that most people regard worthless; a guitar or bass with character; YOUR instrument!

For more information or ordering the book visit

Readers from Belgium and the Netherlands can order the book directly from the publisher.