The Bruegel Guitar (and Vihuela)

Whenever I see an old drawing, painting or sculpture, the gears in my head start to get in motion. Comparing it to others I already know, looking for similarities and cross-links.

But at the same time a huge portion of questions pops up:

A few years ago I came across this painting of “The Fight Between Carnival and Lent” by Pieter Bruegel the Elder (ca. 1525-1569).

Like his predecessor Hieronymus Bosch, Bruegel painted a lot of allegoric scenes. Famous are his paintings with Dutch proverbs, childrens games, or “The Triumph of Death”. As with Bosch there is a lot going on, and you can easlily spend an evening looking at either of their paintings, figuring out all analogies and symbolic meanings. (Who needs television in the late middle ages/early renaissance?)

In this painting we see two groups of people, alsmost in a procession, walking towards each other. The left group symbolizes Carnival, the traditional catholic feast celebrated before the time of Lent (carne = meat, vale = goodbye).

At the front of the left cue we see a fat guy sitting on a barrel. In his hand he holds a spit, like it was a sword. In Dutch he is called “Hans Worst” (Sausage Hans). We find his character in comedy theatre and puppet plays from the middle ages onwards. In this line we see a lot of waffles (traditional food during carnival). The group comes from the direction of tavern “The Blue Ship”. Untill this day this is te name for the cart on which prince carnival is brought into the city. There are also paintings and woodcuts depicting this ‘blue ship’; jolly groups, singing and drinking on an old boat. Its a symbol of emptiness and idleness.

From the church on the right (note the statues covered with cloths, they were revealed on Easter sunday), another procession walks toward the center of the painting. In the front we see a tall, skinny guy holding a breadshovel with two fishes. He’s called “Pekelharing” (Picklehering). Behind him we see a procession of orphans with clappers and people looking introspected, giving money to beggars. They eat fish, bread and salt pretjes. When we take a closer look at the painting we find a lot of instruments. There is a bagpiper in the back of the painting, followed by a group of beggars.

In the carnival procession we see some traditional ‘charivari’ instruments. Like the “rommelpot” (friction drum) of the masked person in the front of the cue. We also see household appilances like the grate, along with other kitchen utensils. These were used to make “rough music”. People went from door to door to get some money, a drink or food. In some countries customs like this remain to this day, as the traditional singing with the feast of “Driekoningen” (Epiphany), Easter or the feast of st Martin. Many of these traditions find their roots pre-christian times.

The “Rommelpot” or “Foekepot” was a membranophone, made out of a clay pot over which pigs bladder was streched. The sound was made by moving a little wooden rod, attached to a hole in the center. There are a lot of depictions of people with de “Rommelpot”. Mostly moralizing pictures, like this engraving by J.C. Visscher after Jan II van de Velde. It has a little rhyme below: 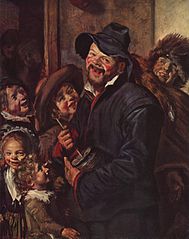 …or this one by his wife Judith Leyster… (after Frans Hals).

In the carnival line we see a guy holding a guitar. On his head he has a cooking jar and his belly almost seems to burst from his gambeson, but when we look closer we notice his skinny legs. He wears a drinking jar on the rope around his puffed up waist.
The woman behind him has a veil for her face and wears a cushion as hat. Her necklace is made from blown out egg shells (a symbol of vanity). She carries a plate of waffles and a  “koekepan” (frying pan) over her shoulder.

The guitar he wears has a very long neck, and some features I will look into in the next blog…

1 Response to The Bruegel Guitar (and Vihuela)